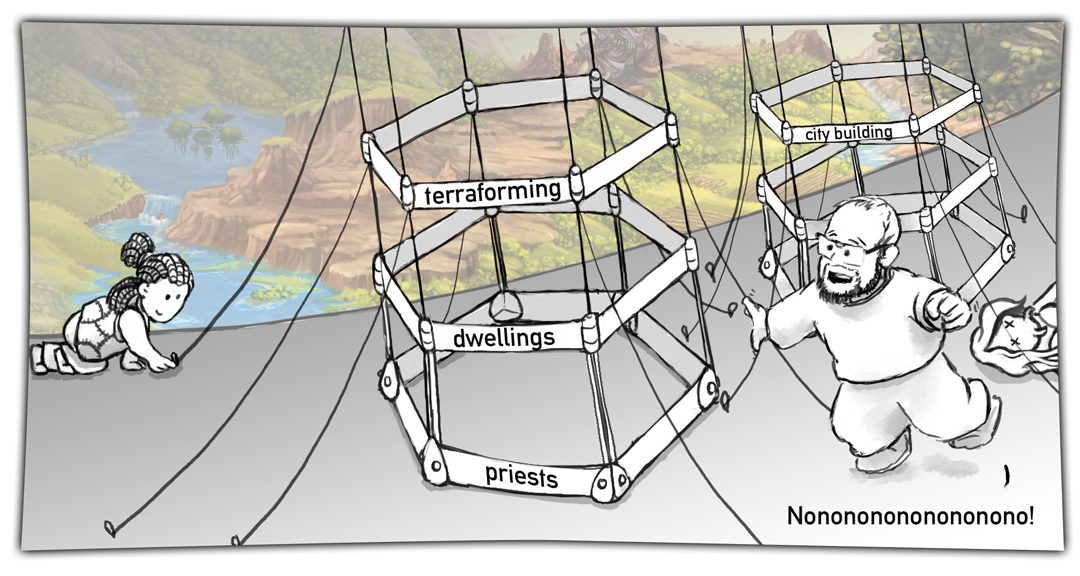 Hi everyone! Felix here to quickly introduce myself and talk about Terra Mystica and the upcoming Fire & Ice open beta.

My job at DIGIDICED is to implement the logic of the games and, up until and including Terra Mystica, it was also to implement the client interaction. Basically, I spend my days transforming board game rulebooks into code and my nights having nightmares about Mermaids wanting to build cities over rivers while they syphon power from Cultists.

Terra Mystica has been a great ride for us at DIGIDICED and we’re happy to say we’ve got a Christmas gift for you! We’ve been improving the base game since launch back in April while working on the Fire and Ice expansion. While some of the new factions have proven to be especially uncooperative – looking at you, Riverwalkers – we’re now at a point where we’ve fixed all the bugs we found on our own.

If the launch of the base game has taught us one thing though, it’s that 80.000 eyes are better than mere 10. For this reason we’re launching an open beta phase of Terra Mystica over the Christmas holidays! While the Steam players have had an early access to the expansion for a few months now (since it’s included in the purchase on this platform), we are now opening it up for everyone for a short time as a beta tryout.

This means that you will be enabled to create friendly games using the expansion and playing on the expansion map with the coming update.

Now, while we are fairly confident that we’ve ironed out most of the bugs related to the new factions, keep in mind that this is a beta and that playing with the expansion and/or on the new maps might prove to be a more unstable experience than usual. We’re grateful to all players willing to try this out and point us in the directions of bugs. (please send them through the bug interface in the game -> cog wheel -> bug bubble)

By the way: we are using the most up to date rules. This includes changes the authors made after launch and that might not have made it into your physical copy:

We’ve also been hard at work with the AI! Machine learning is a new field for our team and we’ve been taking considerably more time than we were anticipating. Additionally, it turned out to be impossible for us to use the games of the Snellman platform to train our AI. Luckily, we now have a few thousand games of our own and started training the AI. It’s still too early for any result and we’re not confident yet as to announce when it will be ready. But we’re working on it with full speed!

We will be updating the game in the next few days (read: when Apple allows us to). We wish you all a lot of fun with the game and happy holidays!